The Aspen Cultural Diplomacy Forum was held at the Kiyoshi Togasaki Memorial Dialogue House at ICU in November, 2012

The Japan ICU Foundation is a 501(c)(3) public charity based in New York City committed to supporting International Christian University’s (ICU) global and ecumenical programs. ICU is a bi-lingual (English/Japanese) liberal arts university situated on a verdant 150 acre campus in the western suburbs of Tokyo, Japan.

The Japan ICU Foundation’s mission is to work with International Christian University, a visionary liberal arts university in Tokyo, Japan, to further strengthen its broadly international and ecumenically Christian dimensions.

The Japan ICU Foundation’s archives are housed at the Yale Divinity School Library in New Haven, CT. Click here for a link to the archive guide.

At the end of World War II, the long-standing hope of establishing a top quality international university in Japan came to the forefront. With Japan suffering from the defeat and the devastation of the war, citizens committed to peace and reconciliation in Japan and North America decided to come together to form a major university of distinctive Christian character that would educate leaders dedicated to cooperation and international understanding.

Planning committees were formed in both Japan and in North America. With the pledges and support of North American mission boards, Japan International Christian University Foundation, Inc., was formally incorporated in the State of New York in Spring 1949. The first President and the Vice-President of the Foundation were two pre-eminent mission leaders, Ralph E. Diffendorfer and John Coventry Smith. Kenneth Scott Latourette, the distinguished professor of the History of Christianity at Yale University Divinity School, succeeded Diffendorfer after his death in 1951. 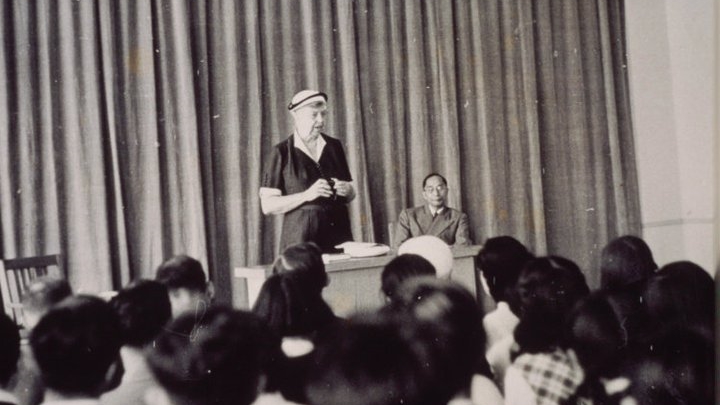 Concerted fundraising campaigns were initiated in both Japan and in North America. Hisato Ichimada, the Governor of the Bank of Japan who was Buddhist, headed the Japan campaign that raised the funds necessary to purchase a large tract of land for the university.

The Honorary Chair of the US fundraising campaign was General Douglas MacArthur, and the North American public responded with generous contributions as well.

ICU was officially founded on June 15, 1949, but the legal recognition did not come until March of 1953 when the university opened its doors to its first class of students. This new university soon became a prime symbol of reconciliation between the people of Japan and the people of North America.

In the early years, with the growing support of a number of Christian denominations in North America and deeply committed individuals, the Japan ICU Foundation assisted in the construction of a number of new buildings on the ICU campus and provided 60% of ICU’s operating expenses and 90% of the resources needed for special projects. During those years, 44% of the faculty members were from overseas, and their salaries were completely paid through the Japan ICU Foundation in New York.

However, in a matter of years, ICU developed into one of the finest universities in Japan and no longer needed the Foundation’s support in covering operating expenses and faculty salaries. Then by the 1980s, while Japan was rapidly becoming one of the leading economies in the world, the Foundation’s constituent church mission boards began to experience decreasing financial resources and began to emphasize programmatic priorities that focused on the more needy parts of the world. Support from North America was so drastically reduced that the Foundation was forced, in 1991, to re-organize and dramatically scale back its operations. The Foundation remained almost dormant until 1997 when, with the support and encouragement of ICU itself, the Foundation’s offices in New York City were re-opened.

By 1999, when ICU celebrated its 50th Anniversary in Tokyo and in New York, it was clear that the Foundation was to be the beneficiary of a very generous bequest from Professor Donald Othmer, and his wife, Mildred Topp Othmer, of Brooklyn, New York. The additional financial resources have enabled the Foundation to, once again, provide significant support for ICU. (Click here to learn more about the Othmers.) In 2000, the Foundation was reorganized into two not-for-profit corporations: the Japan ICU Foundation, Inc. and the JICUF Endowment, Inc., the former is an operating entity and the latter is a support entity.