As the culmination of the student moot court activities led by Assistant Professor Hiromichi Matsuda this year, a team of ICU students participated in the 9th Nelson Mandela World Human Rights Moot Court Competition in Geneva from July 17th to 21st. Professor Matsuda traveled to Geneva with four undergraduate students – Chizuru Yamazaki (senior), Momo Nakakita (sophomore), Toshiki Narushima (junior) and Ryo Usukubo (sophomore). Professor Matsuda received a JICUF grant of ¥681,000 last year to help fund his students’ participation in a series of competitions. The first competition that the team participated in was the Space Law Competition in March, and the second was the Japan Cup in July.

The Competition, held at Palais des Nations (UN Headquarters) was presented by the Centre for Human Rights based at the University of Pretoria, with the support of the United Nations Office of the High Commissioner for Human Rights in Geneva. It was open to undergraduate and master’s degree law students from around the world, and the best teams from each UN region were invited to participate in the pre-final and final rounds in Geneva. They argued a hypothetical human rights case before a panel of top international lawyers. To participate, the ICU team first had to qualify through the preliminary round in the Asia Pacific Region.

Ms. Nakakita and Mr. Joseph Smith, a Rotary Peace Fellow who will start his second year of the master’s program this September, played a central role in preparing the written memorials for the qualifying round. 13 university teams qualified in the Asia Pacific Group, with ICU and the University of Tokyo being the only two teams from Japan. Ms. Yamazaki and Ms. Nakakita represented ICU as speakers in Geneva, while Mr. Narushima and Mr. Usukubo participated as observers. All of them contributed to research and preparation.

Below is a report submitted by Professor Matsuda.

“The ICU team made it past the very competitive preliminary rounds and was chosen to participate in the competition in Geneva. It was an incredible feat for ICU to beat teams from renowned universities and law schools in all of Asia. It proved the strength of ‘legal education in liberal arts’ that ICU pursues.

The ICU team successfully made legal arguments in front of UN human rights specialists who presided as judges on such challenging topics as the rule of exhaustion of local remedies and the states’ obligation to protect  in cases of discrimination among private citizens within their territories. The team was highly commended not only for the research done prior to the competition, but for their effort to utilize the UN Library and prepare until the last minute, and use that new knowledge immediately in the oral pleadings. The ICU students also actively tried to incorporate French, one of the official languages of the UN, and exercise a multilingual/plurilingual approach. Other participating universities and UN specialists were pleasantly surprised at our plurilingual skills.

In addition to participating in this competition, we had the privilege of meeting Ambassador Junichi Ihara, Minister Kansuke Nagaoka and First Secretary Tomoko Kubota at the Permanent Mission to the International Organizations in Geneva; Professor Yuji Iwasawa, Chair of the Human Right Committee; Professor Sarah Cleveland, the independent expert to the Committee from the U.S.; Professor Shinya Murase of the International Law Commission; and Professor Yoko Hayashi of the Committee on the Elimination of Discrimination Against Women. It was a valuable experience to observe the various important international conferences that were being held at the Palais des Nations. At the International Law Commission, Professor Murase, who is an ICU graduate, mentioned our participation to the President who welcomed us publicly during one of the sessions. During the tour of the UN Library, we had the opportunity to see rare materials concerning Inazo Nitobe, and the UN Library even wrote about our visit on their Facebook page.

As Ms. Momo Nakakita, who was one of the speakers in the ICU team, was accepted to the OECD Student Ambassador Programme, Ambassador Motohide Yoshikawa, Distinguished Professor at ICU (former Japanese Ambassador to the OECD and the UN) introduced our group to the current Japanese Ambassador to OECD Hiroshi Oe, who kindly invited us to his official residence for dinner. Mr. Sunao Takao, Principal Deputy Director, was also in attendance, and shared captivating stories about his experience offering simultaneous interpretation for the Prime Minister. ICU alumni and OECD staff Ms. Kaori Miyamoto, Ms. Miho Taguma and Mr. Lars Barteit took the time out of their busy schedules to meet with us, enabling us to learn about international organizations. They also made suggestions about how ICU students could become involved in the educational research that OECD is conducting, which could help further activate the OECD Student Ambassador Programme. In addition, we had optional visits to the Musée national de l’histoire de l’immigration (National Museum of the History of Immigration) and Library of the Cité Universitaire Internationale, which were also enjoyable.

In both Geneva and Paris, we were able to visit many important international organizations. The ICU students were commended for actively engaging in discussion. It was also meaningful for the students to realize the importance of multilingualism and plurilingualism including the ability to use French. I would like to express my sincere gratitude to JICUF and OECD Tokyo Center for their support.”

The students who participated sent JICUF reports of their experiences in Geneva, which have been compiled here. Below is an excerpt of their comments.

Ms. Yamazaki thinks there were two main takeaways from the competition. First, she learned that in domestic moot court competitions, the breadth of knowledge was most important, but that in international competitions, the manner of presentation was just as crucial. She found that the ability to speak confidently influenced the outcome of the competition. Second, she was able to observe the deliberations in the International Law Commission, Human Rights Committee and the Committee on the Elimination of Discrimination Against Women, and witnessed the process of resolutions being adopted. This inspired her to become a professional who could contribute in such fora. 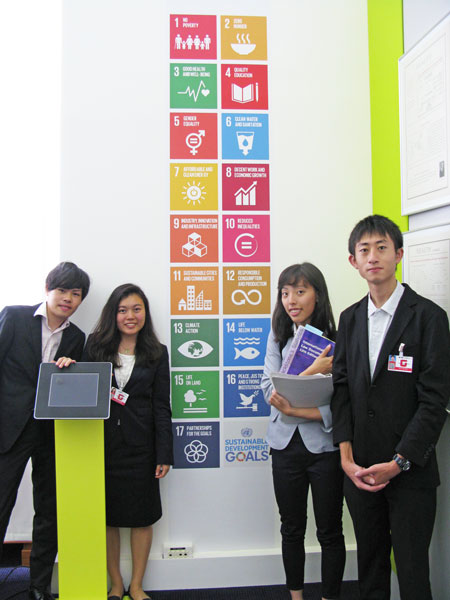 Mr. Narushima was impressed by the wide range of available resources and the ease of finding them at the UN Headquarters. The most memorable experience for him was observing various sessions and witnessing the historical moment of the adoption of a resolution exempting crimes against humanity from sovereign immunity. He was excited to be able to communicate in English with others, which bolstered his confidence.

For Ms. Nakakita, the biggest lesson was that “flexibility was key.” This applied to both the competition and interaction with professionals and other students. During the competition, she strived to answer all of the questions posed by the judges and finish making her statement within a limited time. The judges advised her to be more flexible in her statements. In communicating with UN staff and other participants from all over the world, she also felt that it was important to be sensitive about the other person’s religious or political background and adjust the topic of conversation accordingly – in other words, to be flexible.

Mr. Usukubo remarks that “the experience at Geneva was a real treasure as it not only gave me the opportunity to prepare and participate in moot to deepen my knowledge in international law and human rights, but also stimulate my interest in organizations that are active in the field by interacting with staff, experiencing the working environment, and utilizing the facilities of the United Nations.”

Finally, Mr. Smith, who took part in the preparation, but did not travel with the team to Geneva says that it had always been his dream to participate in a legal discussion. Drafting the memorial was very challenging but also exciting, and he is confident that ICU will continue to participate in this highly competitive event and one day bring home an award.

Congratulations to Professor Matsuda and the students!

We hope that ICU students continue to participate in moot court competitions in the future.