Last November, ICU Professor Stephen Nagy led a group of undergraduate students on a two-week academic and cultural exchange trip to China. Supported by funding from the JICUF Grants Initiative, Professor Nagy and six students traveled to Beijing, Shanghai, and Nanjing. Along the way they stopped by historical sites, attended lectures at Chinese universities, and engaged with Chinese college students. The following are the six student participants’ impressions on the trip and what they learned. 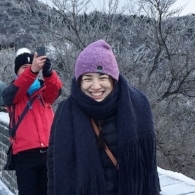 My favorite discussions in China were with the China Foreign Affairs University in Beijing. We spoke to two different group of students at two different campuses of the university during our six-day stay in Beijing. At both campuses, students were engaging, inquisitive, and thoughtful. The discussions ranged from current popular Japanese culture and the low birth rate in both countries to more politically heated discussions such as the East and South China Sea island disputes, the protection of intellectual property rights, and the historical narratives of WWII in both countries. What I loved about these discussions most was how raw it was. Students were not afraid to state their opinion even if at times it seemed quite blunt to the other side. While some of them may have had obviously differing opinions from many of us Japanese students, they were always respectful. These discussions really opened my eyes to the different opinions and narratives that exist in China. Like any country, the Chinese people cannot be generalized into one demographic or perspective. People of different backgrounds, regions, education, age, etc. have different perspectives that are just as important to bring to the table. I really enjoyed learning these different perspectives and broadening my understanding of China and its civilian perspective on Sino-Japanese relations as well as Sino-US-Japan trilateral relations.

Looking back, the Young Leaders Development Program greatly influenced and stimulated me in various ways. The greatest shock for me was the gap in the views of Japanese and Chinese people. Before participating in this program, I had the preconception that all Chinese people held negative emotions towards the people in Japan, especially over historical and territorial issues. However, by actually obtaining the opportunity to interact and discuss face-to-face with Chinese students, I was surprised to realize that the people in China did not necessarily feel this way. In fact, almost all of the Chinese students shared a positive vision towards the Sino-Japanese relationship and advocated the importance of setting historical, territorial problems aside for the two countries to cooperate with each other in economical, technological and environmental terms. Thus, this program made me realize that in order to improve the Sino-Japanese relationship between China and Japan, what we need is more opportunities of direct interaction, in order to close the gap between the Japanese and Chinese people.

We had many opportunities to listen to lectures and have discussions with Chinese scholars and students, which was an eye-opening experience I had during our trip. The most memorable ones were at Chinese Foreign Affairs University and with Dr. Hu Zhi Yong at Shanghai Academy of Social Sciences. Placed in front of a classroom filled with about 50 Chinese students of our age at Chinese Foreign Affairs University, we were bombarded with unexpected questions some even mixed with anti-Japanese sentiments. I was surprised by the different and some distorted perspectives, but at the same time inspired by their passions.

With Dr. Hu, I had a chance to press him with questions regarding the South China Sea, which was my main research question. I was struck when Dr. Hu told me his “facts” about the disputed area which contradicted one of the most basic assumptions that all the articles I’ve read were built on. I was able to find my biases created by reading articles written only from western and Japanese perspectives, also learning the importance of reading sources from various viewpoints.

What we usually see of China in media and books are only a small portion of what the country really is. The two eye-opening weeks at three cities enabled me to look at the cultural values, political influences on the citizens, as well as the differences in thoughts and perspectives within the country.

As my research is about the maritime issue between China and Japan, I used the lectures and discussion times to learn about the Chinese perspective on the dispute. Although I did not know what to expect until the trip, I found their idea on future Japan-China relations to be surprisingly optimistic. Many cutting edge scholars had a view that through cooperation and collaboration on economic and environmental issues, the two countries can strengthen ties rather than be stuck in a dilemma. The trip and the lectures gave me an impression that, although it may take some time, constructing peaceful identities amongst each country will create a stronger South East Asian region.

In more personal terms, meeting Chinese students and hosts from various Chinese universities was a wonderful opportunity to share pop-culture and each other’s everyday student lives. I found that the two country’s relations at the individual level is very amicable and compatible. Their kindness and enthusiasm was definitely the highlight of this trip. As a student at ICU, where many globally open-minded students reside, I hope that the YLDP will foster more of the student-to-student relations in the future.

One of the most interesting things I got to know through this trip was that many Chinese students and professors use VPN in order to evade cyber police of Chinese government and to get access to SNS and outside information. Before going to China, I assumed that most Chinese people were swallowing biased information from the Chinese media which has been under control of the government. However, they are actually well aware of the fact that PRC oftentimes distorts information. This was a big surprise for me and was also a really nice opportunity to change my view on China.

Student No. 6
There are many “kinds” of China. I think I could somewhat understand the extensiveness of China during this program. Fortunately, since we could visit three cities, Beijing, Shanghai, and Nanjing, I could find a lot of differences among them. Especially, people’s behavior and thoughts were different in a good or bad way. Before this program, I think I might have tended to say “China is ～” in generic terms, highly affected by the mass media. On the other hand, I could also find that each city had something different. In other words, China was different than what I was expecting. When you speak of China, on the whole, you might tend to see her as a threat, because of a sense of uncertainty or something like that. However, there are so many aspects in China, and each one of them makes China “China”. You always have to keep this kind of idea in your mind when you think of the country as a whole. In addition, it is very important to cultivate your own perspectives towards China by yourself. That is one of the things that I learned through this program.

A Year in the ICU Woods