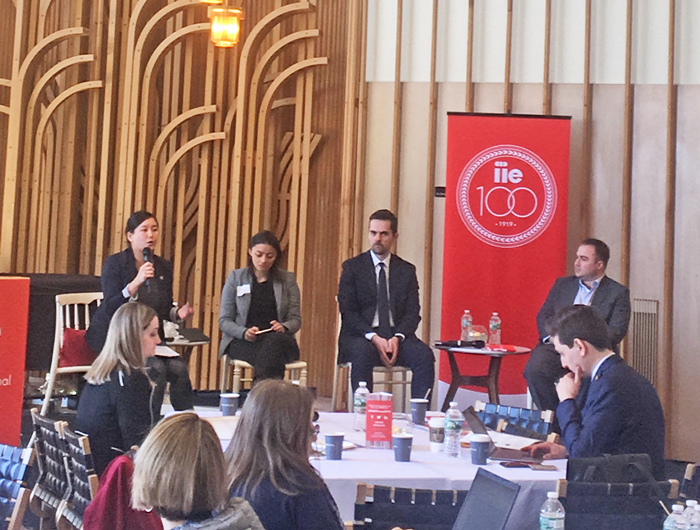 On April 4th, the Institute of International Education (IIE) hosted the first Global Forum for its Platform for Education in Emergencies Response (PEER) Initiative in New York. Paul Hastings, Executive Director of JICUF, contributed as a panelist in a breakout session on “How to Build Successful Partnership in Higher Education in Emergencies” along with Heba Ledwon of German NGO Kiron Open Higher Education and Charley Wright, Connected Learning Specialist of UNHCR.

IIE launched PEER in 2017 to connect displaced and refugee students to higher education opportunities, raise awareness of the importance of higher education in emergencies, and to convene leaders in the field to exchange best practices and encourage collaboration. More than 130 professionals representing universities, international organizations and NPOs attended the event.

Two plenary sessions were held in the morning, discussing how universities can help displaced and refugee students access higher education and feel part of a community as well as the obstacles that need to be overcome.

In the breakout session on partnerships, Paul explained how JICUF and ICU have built partnerships in the U.S., Japan and Turkey, to plan and administer the scholarship for Syrian refugee students at ICU, the Syrian Scholars Initiative (SSI). These partnerships have been instrumental in recruiting Syrian students in Turkey. The first two Syrian students enrolled at ICU in September 2018, and the next two will matriculate this fall.

The event ended with a “fireside chat” with Allan Goodman, President of IIE and George Rupp, former President of the International Rescue Committee, followed by closing remarks from John Sexton, former President of New York University. John Sexton emphasized that supporting displaced and refugee students shouldn’t be considered charity, but that student bodies were enriched by the presence of these students.