Ms. Jessica Cork studied at ICU from 1995 to 1996 as an “OYR” (“One Year Regular,” or exchange student) when she was an undergraduate student at the University of Massachusetts Amherst. The year before, she had attended the Summer Course in Japanese at ICU. After graduation, she participated in the JET program (Japan Exchange and Teaching Programme) run by the Japanese Government, and after working for the Consulate General of Japan in Atlanta for over a decade, she joined the YKK Corporation of America, where she currently holds the position of Vice President of Community Engagement and Communications.

Ms. Cork recently spoke at JICUF’s Global Alumni Speaker Series, and agreed to write an article for current ICU students based on her talk.

Career Advice from a Lifelong Learner

When I was fifteen, I decided to major in Japanese in college.

No one in my rural New Hampshire hometown had the slightest interest in Japan, and I didn’t have any idea what one did with a degree in Japanese. But I was determined to pursue my dream.

Here’s my story, along with some lessons I learned along the way. 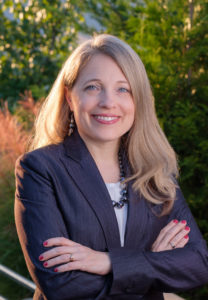 Don’t let fear get in the way of your dreams.

When I was in high school, I heard about an opportunity to do an 8-week summer homestay in Japan and I immediately ran home to beg my parents to let me go.

Of course I was thrilled about going, but as I started packing, I was overcome with fear. I really had not been away from home before, and in pre-Internet days, it meant no communication with my family or friends for 8 weeks.

I’ll never forget the day I got off the train in Hiroshima to meet my new host family. I nearly burst in tears as I met them, paralyzed with anxiety. I felt in that moment as though I had made a terrible mistake. I had no idea how I would make it through the summer.

That summer ended up being the most incredible experience of my life, and set me on the path that led me to my current career. It was a great lesson to learn at 15 – even if you are afraid, don’t let fear stop you from pursuing your goals!

When you choose a path, it’s okay if you don’t know the destination.

During that first summer in Japan, I caught the language and travel bug, and decided almost immediately that my goal was to become fluent in Japanese. After graduating from high school, I entered the University of Massachusetts as a Japanese Language and Literature major. In retrospect, I am so grateful to my parents for allowing me to do this because I had no idea what Japanese language majors do upon graduation, except perhaps translating or interpreting.

I didn’t know at the time where my path would lead, but what I did have was passion for what I was studying and the determination to be successful. In her New York Times bestseller “Grit”, psychologist Angela Duckworth demonstrates that grit— “a combination of passion and perseverance for a singularly important goal” — is the hallmark of high achievers in every domain. I’m a firm believer in this truth.

You need both passion AND perseverance.

But keep in mind that passion alone is not enough. Perseverance is a vital part of the combination. For me, that meant the willingness to put in countless long hours mastering hundreds of kanji, only to forget them and have to learn them all over again. For the entire first year after I started studying Japanese, I found it so difficult that I wanted to quit. It wasn’t what I had envisioned as a high school student touring ancient shrines and eating shaved ice. It was really, really hard work.

Then I went to study at ICU for one summer and then for a full year and truly learned the meaning of difficult! I took 6-8 hours of Japanese classes per day, sociology and history classes taught in Japanese, had term papers to write in Japanese.

But fluency was my dream and quitting was NOT an option!

When in doubt, try something new.

I had two options after graduating – entering graduate school in Kyoto or joining the Japan Exchange and Teaching (JET) Program and working as a Coordinator for International Relations in rural Hiroshima.

It was one of the pivotal decisions in my life. Wasn’t getting a master’s degree more practical? And wouldn’t Kyoto be a phenomenal place to live for two years? But I had already lived in a big city in Japan, and I had already experienced being a student on a university campus. I wanted a new experience – the opportunity to live in rural Japan and to work in a Japanese office. I joined the JET Program and had an experience so life changing it is hard to articulate. My Japanese language skills as well as my understanding of Japanese work culture improved exponentially and I made lifelong friends.

When you are not sure what path to take, sometimes it is best to deviate from the “safe” path – try something you have not done before.

Travel while you can.

After I finished the JET Program, I did not have a job lined up yet in the United States, so my husband and I spent 4 months backpacking home from Japan, visiting 20 countries in Southeast Asia, the Middle East, Africa and Europe along the way.

Take advantage of the freedom you have when young. Young people are sometimes too eager to start their careers immediately upon graduating. A job will always be there; and it often comes with too little vacation, a mortgage, and eventually a family. No matter how much you think there will be opportunities in the future, it gets significantly harder as you get older to take time off and travel. Travel as much as you can when you have the time.

There are no bad experiences.

When I returned to the United States, I still had no idea what I could do with a Japanese language major, so I got a job as an interpreter at a manufacturing company. I was very excited to have a job using my language skills.

But I ran into problem. I found out very quickly that I really dislike interpreting! But what I learned from that job is that even jobs that are not a good fit for you have a lot to teach you about what you enjoy and what you don’t. Just don’t stay too long in a job in which you are not happy or is not a fit for you.

And the connections I made at that first job led to my dream job, working for the Consulate General of Japan in Atlanta. I had the opportunity to plan cultural events, select JET Program participants, send students to Japan on study aboard programs and expand my network in Georgia. I remained in that position 11 years.

Eventually, I was interested in finding a position with opportunities for advancement, but I found myself stuck again. Where else could I use my Japanese language skills? Where could I pursue my passion for building bridges between Japanese and Americans?

Build your network through volunteering.

Have you ever heard that an estimated 70% of jobs are not advertised? Introverts like me do not like this statistic because it means that most jobs are found through networking.

I used to think that I am terrible at networking. But I love volunteering! And it turns out that volunteering is a great way to build your network.

I started volunteering with the Japan-America Society of Georgia and the Japanese Chamber of Commerce of Georgia as soon as I moved to Georgia in 2001. Through those organizations, I met the CEO of YKK Corporation of America. Our paths crossed multiple times and worked together on several events. Twelve years after we first met, I was given the opportunity to join YKK.

Stretch beyond your comfort zone.

When I was offered the position at YKK, I had reservations – first about working in a corporate setting and secondly about whether I could do the job. Most of my career had been spent working for governmental organizations and I had never been a manager. There was so much to learn.

In order to grow, you need to take on new challenges and increasing responsibilities. If you are waiting for the day when you are one hundred percent qualified for a job, that day will never come.

Be a lifelong learner.

Learning should not stop when you graduate from school. I got my master’s degree in Japanese via distance while working full time and with three kids under five years old at home. Be a lifelong learner, combine passion with perseverance, and don’t let anything get in the way of accomplishing your goals.