In fall 2018, third-year ICU student Hotaka Omata (second-year at the time) received a JICUF grant of ¥424,000 for his project to build housing in Nepal. Hotaka and seven other ICU members of the FIWC (Friendship International Work Camp), an inter-collegiate volunteer group, traveled to Ramche village, Nepal, which has yet to fully recover from the devastating April 2015 earthquake. Breaking up into two teams, they embarked on two 20-day missions on February 20 and March 8 respectively to help rebuild the community. Students from other universities also participated in these missions. In addition to the recovery efforts, the students took the time to arrange some opportunities for cultural exchange with the villagers in the form of activities and workshops. JICUF funds were used for travel and materials for the workshops. We asked Hotaka and fellow volunteers Takashi Kitano and Hirona Noguchi about their experiences and motivations for the project.

JICUF: In your own words, please describe the goals and motivations for this project.

Hotaka Omata (HO): The goal is to facilitate the villagers with the reconstruction from the huge earthquake in 2015. My motivation for this project is rooted in the fact that I would like to do whatever I could to motivate them to rebuild their lives.

Hirona Noguchi (HN): The goal of the project was to make a difference. 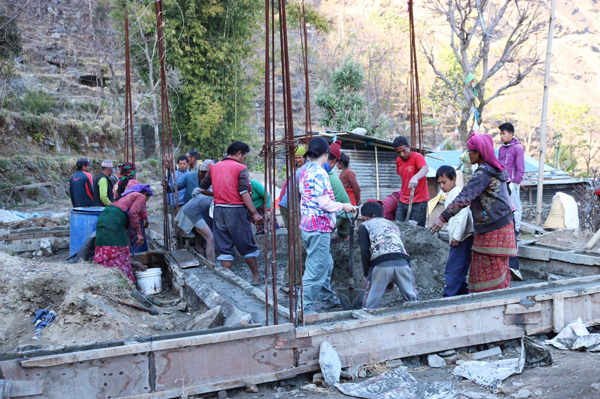 JICUF: What was the most fulfilling part of this project for you?

HO: Completing the project as we planned was one of the most fulfilling parts. Constructing a better relationship with the villagers, especially adults, than last year was also satisfying.

TK: That we were able to rebuild the community house according to schedule, although it is not fully completed.

HN: In the sense that we challenged ourselves to improve the quality of our project and made a good result, it was fulfilling to me. Last year, we mostly just engaged with constructing the community house. It was a problem that we could not afford time to get enough interaction with villagers and know about their lives and ideas. This lack of information and interaction caused us some doubt for the project. Therefore, this year, in addition to the construction work, we conducted field work to grasp the situation of the village more precisely and made more time with villagers. We also had another survey in Kathmandu in order to compare the life between the city and countryside. From these surveys, valuable information was gathered for our organization and we can encourage newcomers to think of the overarching goals of our project and take action to fulfill it.

JICUF: What was the most difficult part of this project for you?

HO: We had two difficulties. The first was that we totally depended on the villagers to manage the construction since we did not have enough skills and knowledge for it. In rare cases, we did not have anything to do because the work was too complicated. The second was that we could not encourage all the villagers to join the work. We had hoped as many villagers as possible would voluntarily participate in the project, but those who actually took part in it were limited. As long as the project was aimed for the villager themselves, we wanted them to participate, but it didn’t work as we had hoped.

TK: Communicating with the villagers, in all situations.

HN: The most difficult part of this project was to lead the members of my group to understand the problems of the project, listen to their opinions, and make a new way for achieving good results. Since FIWC consists of students from different colleges within Tokyo, we all have different motivations, interests, and talents. Half of my team could not find problems in the project and take action to improve. As a leader, it was really hard for me to make them notice and to confront new challenges for the group and for myself at the same time.

JICUF: What did you learn from this project?

HO: I personally learned that this kind of volunteer project should focus on villagers. Our activity was planned by us, assessed by us, mainly done by us. That was one of the main reasons that we could not sufficiently serve them. In order to create a project that best matches the village’s situation and respects the individuality of all the villagers, they need the opportunity to actively participate in decision-making from their perspective. Our personal satisfaction with a project does not necessarily translate to a helpful outcome for the people we are trying to help. Putting the villagers first is the key to their  prosperity and success.

TK: The difficulty of making people care about something, and the many ways that volunteer work can be accomplished.

HN: I learned the way to make a good project in a group. Just thinking in one’s head is not good. To achieve a higher quality project, it is important to ask for some feedback from trustworthy people, collect information from books, and discuss what you have got with members. I am not sure I was able to do all of it this time, but next time will be better because I have already been through these difficulties.

Any final thoughts and reflections?

HO: I am partially satisfied with the project but I feel that it could be more sophisticated. To let the villagers decide their own direction and express their  individuality is my goal for the next project.

TK: In terms of my attitude towards volunteer work, my sense of personal accomplishment may be stronger than others.  Since joining FIWC, I have occasionally had to think about what volunteering really is. Is volunteering something you do for others, or for yourself? Which should be prioritized: the needs of the area or our own personal values? Is the work schedule appropriate for the capacity of a student volunteer group? I believe that there exists no single answer to these questions, and that the answer changes depending on the context of the particular situation. My personal conviction for volunteer work is to be dedicated to my work, and to try and understand the realities of the situation.

HN: This experience has made me stronger and boosted my abilities. Even after the project, new challenges have appeared. We will try harder so that we can influence other FIWC members of other camps. My goal this year is to share new insight on international volunteering with FIWC members and encourage the organization to think critically for better results. Without JICUF, we could not have accomplished things as we planned. Thank you so much for supporting us.

Congratulations on a successful project!

The next application period for JICUF Student Funds will begin on August 26, 2019.